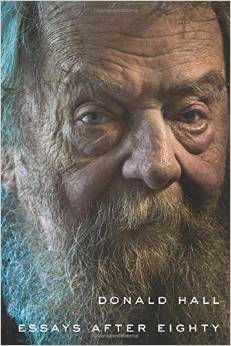 For the last 15 or so years I have made it a point to read everything this former Poet Laureate has written – and he has written much as a poet and essayist. When I came across his most recent published manuscript in a compact little bookstore in lower Manhattan there was no question in my mind that this little tome was going home with me.

It may sound grim, but occasionally I will search on Google to see if Donald Hall is still alive. To date he is 86 and according to these essays his physical health is sinking irreversibly into gravity’s destination. Though his body is failing, his mind and his writing are as penetrating as ever. He remarks that as he has aged “poetry abandoned me” but prose has not. His prose, however, is poetic and beautiful in its simplicity and clarity.

“Prose endures” he writes and then leans into what could be best described as the arch narrative of the collection as well as life itself, “I feel the circles grow smaller, and old age is a ceremony of losses.”

It seems condescending to suggest any surprise that this book is as good as his earlier writings, as if such a feat is remarkable if not miraculous for  such an “old man.” He writes of many such indignities suffered by the old, but not in anger or even pity. Most often it is with wry amusement. He describes a family dinner where a grandchild’s roommate carelessly pulls a chair to sit with her back, “directly in front of me, cutting me off from the family circle. I don’t exist.”

Words carefully chosen reflect on his life as a poet and writer, but these essays are not memoir. He writes as a bystander and observer to his own life; his loves; his failures; and his successes and he does so in such a way as if he is speaking to no one in particular. I found his essay “Death” poignant and transparent without leaning carelessly into poetic romance. Likewise his concluding essays “A House Without a Door” and “Remains” were honest, earthy, and in imbued with a melancholy kind of hope.

Reading Essays After Eighty was like traveling with a wise and curmudgeonly old man who says what he thinks but because he thinks so well, you make sure you listen to every word. There is humor mixed with his sadness as his large life is giving way to his diminishing world.

Soon Donald Hall as a living, breathing poet will be no more. That is just the way of it. I am grateful his words will live on. Should these be his final published words we will not lament an unfinished life.